Dream of my guru on Chokhor Duchen 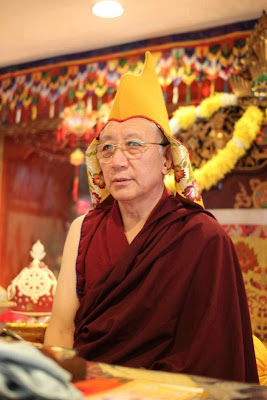 Here's a post which I wrote a couple of months ago which was still in Draft mode.  On 23 July 2013, it was Chokhor Duchen, one of the 4 great holy days of Buddhism. Also known as the Festival of Turning the Wheel of Dharma, Chokhor Duchen commemorates the anniversary upon which Shakyamuni Buddha first began teaching the Dharma. For seven weeks after his enlightenment, the Buddha did not teach. After this period, Indra and Brahma offered a dharmachakra and a conch shell and requested Shakyamuni to teach. Accepting, Buddha Shakyamuni turned the Wheel of Dharma for the first time at Sarnath by teaching on the Four Noble Truths.

At dawn of Chokhor Duchen, I dreamt of my guru Kyabgon Dagyab Rinpoche. He was sitting on a high throne seat and giving blessings. It was on a big platform with no shelter, in an open space, with clear white skies and tall mountains behind. Rinpoche was wearing very elaborate ceremonial robes, complete with a hat (more like a jewelled crown) with thick and heavy colourful robes draped over him. He looked like a King or Prince from ancient times. I have never seen Rinpoche in this appearance before, besides his usual monk's maroon robes and tall yellow hat in official occasions. I also joined the people who were queuing up to offer khata and to receive blessings from Rinpoche. Most of them were Caucasians. As usual, Rinpoche was full of wide smiles for each one of us when he blessed us.

Afterwards it seemed that the platform which Rinpoche was sitting on became like a vehicle and it started moving. Then, what looked like four giant warriors appeared instantaneously on the platform surrounding Rinpoche. They were tall and twice the size of Rinpoche, had a fierce demeanor and armed with weapons and wearing thick armors and helmets. From where I was standing, the giant warriors were looking sternly ahead as the platform slowly moved from my left towards my right. Dagyab Rinpoche also looked solemn as he sat on the throne on the moving platform. Then in a few seconds they were gone, vanished, and what remained was the quiet clean air of the tall mountains in the background.

It has been a while since I last had a dream of my guru and I was quite happy it was on the auspicious day of Chokhor Duchen.  Om ah hung benza guru padma siddhi hum!