My family and I like to check out places to eat, as most typical Singaporean families do. We have not been to Thien Kee Steamboat for many many years since I was a teen. It was a nostalgic visit. 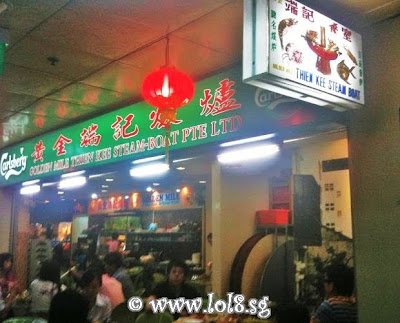 Thien Kee is located at the basement of Golden Mile Tower. Thien Kee serves steamboat and Hainanese dishes like chicken / rice, pork chop, satay and tze char dishes.  It was deja vu because the air smelled exactly like those you can find in old commercial buildings, like the smell of food in a laidback restaurant in those days. 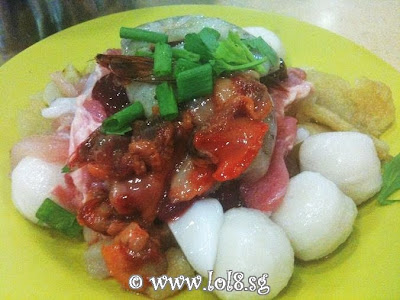 The steamboat is available in different sets like $44 or $55.  We ordered the smaller set, which came with 2 plates of raw ingredients heaped high, plus a plate of vegetables, and 2 raw eggs. The ingredients included fishballs, see hum, fish maw, pork, fish slices, peeled prawns, sotong and liver. 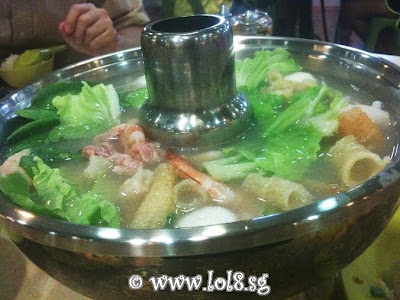 First you let the soup base boil, then you throw in everything into the steamboat pot, and just let it cook. Then break an egg or two so that the soup tastes sweeter. Add light soya sauce according to your preference. 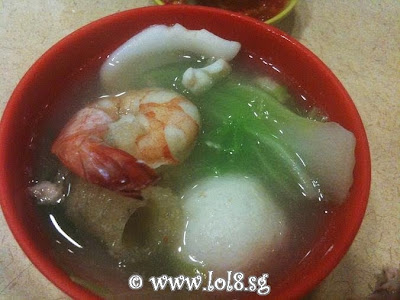 This was Round 1 of my steamboat soup. Yummy!  We love soup so much, that we always asked for refill of the soup base. 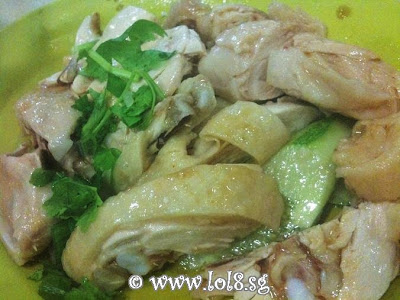 Everyone who visits Thien Kee will order their Hainanese Chicken Rice.  We really like the chicken rice, especiall my mom. She said it was very fragrant, compared to those outside. If anything I would not mind just having the chicken rice alone. The chicken was tender with great with the crunchy cucumber, dribbled with sesame oil and light soya sauce. 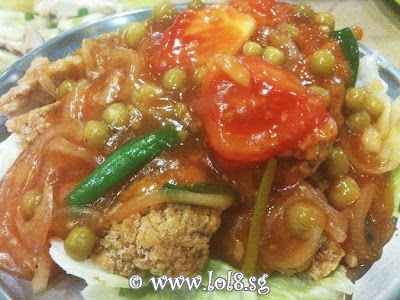 If you are in Thien Kee, its Hainanese Pork Chops is a must-try.  I have tried those from Chin Chin in Purvis Street and Wee Nam Kee in Thomson Road (both are fellow popular Hainanese food joints). I think I prefer the pork chops in Thien Kee for now. The pork chops came in generous slices, and deep fried to perfection. The inside was tender and juicy. My niece loved it and children do not lie. The only thing I miss was they did not have potato slices as is common in most Hainanese Pork Chops.  There were just canned beans and onion strips drizzled with the tomato ketchup sauce. 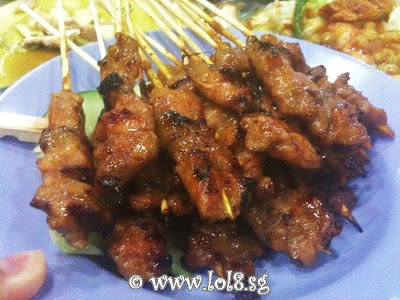 We also ordered their satay. I love satay anytime. The pork satay  was not very tender, it was slightly chewy but quite nice. And I always love the sides of sliced cucumber and onions. 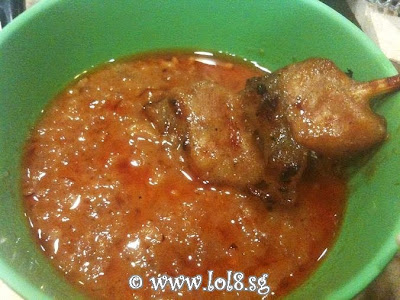 I love the peanut gravy which you dipped into with the satay stick. Actually we could have dipped the ingredients in the steamboat into the peanut sauce too, if you like. It reminds me of Lok Lok in Malaysia. Lok Lok is like a steamboat / hotpot / shabu shabu with a wide range of fresh foods such as meat, seafood, fish balls, vegetables, quail eggs, etc. placed on little skewers and laid out upon a round table with a pot of boiling water as the centerpiece. After the little skewers of food were cooked, they are dipped into the peanut gravy. It used to be available in the old PUB building canteen but it is closed now with the newly renovated building. 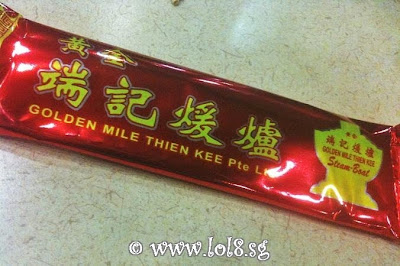