Curb it! Are you in control? 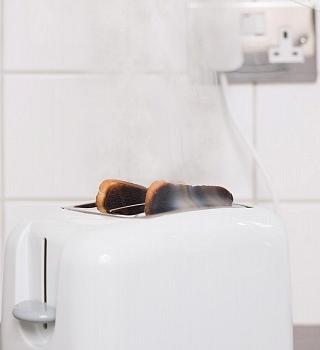 Yesterday, I came back home, and I smelled a weird burning smell coming from the kitchen. It was from the bread toaster. I saw the switch was still turned on when there was no bread in it. I quickly switched it off and a few sparks came out. My father likes to toast his bread for his afternoon snack. He has forgotten to switch it off.  When I asked him about it, he thought it was another plug and insisted that I had switched the plugs between the bread toaster and the microwave (which was turned on all the time). How could I have done anything when I had just got home? I got a little pissed off by the accusation. It was not the first time that my father denies everything when confronted, and instead pushes the blame to someone else. I retorted, he toasts bread everyday, how could he have got the switches to different gadgets wrong? Then he kept quiet.

I was angry. It was not the first time he screwed things up, all due to forgetfulness. Once, after cooking and eating noodles from a small pot, he had left the fire on the stove on for many hours before I discovered it. The bathroom light could be switched on the entire day just because he forgot to switch it off. The almost-dry clothes hanging outside the windows got drenched by the rain just because he forgot to bring them in. His laptop always has problem starting up, because he somehow screwed up the settings but insisted he did not touch anything.

I was angry because it was so dangerous. What if he burns the whole house down one day? We usually let ourselves cool off by not talking to each other for a while. I just ignore and try not to think of the episode anymore. I always remind myself that he is getting old. I was slightly happy that I managed to curb my anger faster this time. I am glad that nowadays I am able to control my anger better. In the past, I would have flew into a rage which would have persisted for a long time.

A quote from His Holiness the Dalai Lama, "At the moment when strong feelings of anger arise, no matter how hard one tries to adopt a dignified pose, one's face looks rather ugly.  The vibration that person sends is very hostile. People can sense it, almost as if one can feel steam coming out of that person's body. Indeed, not only are human beings capable of sensing it, but pets and other animals also try to avoid that person at that instant."

So perhaps my father's usual response of denying everything is a reaction to my anger. I just have to learn to let it go, faster.
yours truly, STUMPBO @ 12:50 am