Just a week ago, with the advise from Lama Zopa Rinpoche, ABC invited Khen Rinpoche Lama Lhundrup to Singapore to seek medical treatment. Early this morning I received extremely sad news from ABC and FPMT. After extensive tests and examination by specialists, Khen Rinpoche has been diagnosed to have cancer in the stomach. 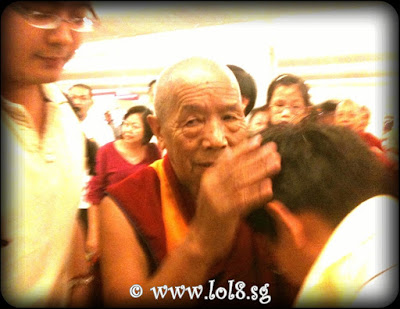 This was a photo I took of Khen Rinpoche at the airport last week when I went to see him, together with a large turn-out of about 200 of Rinpoche's students and disciples. Compared to the last time I saw Rinpoche 3-4 months ago, he looked a little tired seemed to have lost a little weight). As Rinpoche was on a private visit and in order not to tire him, there was supposedly no personal blessings at the airport. Nonetheless, as Khen Rinpoche came out of the arrival hall, accompanied by Geshe Chonyi and his assistant, he smiled widely at everyone and tap everyone's head to bless them whoever went near to him, as well as waved to many others a distance away. I managed to offer karta to Rinpoche and whispered to Rinpoche to please take care and have a good rest. Rinpoche smiled widely, closed his eyes, nodded his head and said "ok". Quite an emotional moment for me. After Rinpoche's blessing, my body was burning hot for a long time. 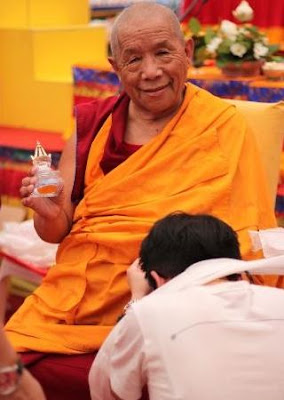 I remember 2-3 years ago, at the Vesak Day celebrations which ABC held annually at the big field next to Aljunied MRT station, I had brought my Grandma along to offer prayers. Among the huge crowds, we bumped into Khen Rinpoche who had just arrived without any announcement. He walked towards my Grandma, gently held her hand, blessed her head. He said "om mani padme hum" and proceeded to teach my Grandma the mantra syllable by syllable, repeating the mantra again and again slowly until she managed to utter "ong may nee peh may ong". I was so touched. 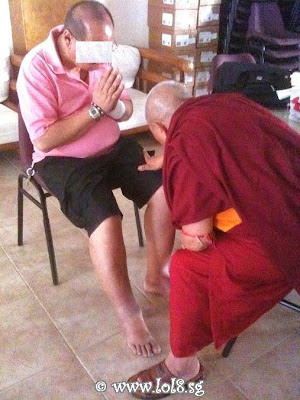 Just last September when Khen Rinpoche was here, after a teaching, he decided on impromptu, to give an oral transmission of Om Mani Padme Hum to reinforce and speed up the realisation of all participants' compassion (we were so lucky). Just when Rinpoche was leaving and walking towards the car, a man approached him and whispered to him something. Apparently the man's legs were swollen and he was limping. Rinpoche immediately asked him to sit down, and for the next few minutes, Rinpoche bent down and chanted many prayers and mantras and blew on the man's thighs and knees. I was very fortunate to witness a very compassionate highly realised lama praying for and healing a suffering man. Again I was very touched. And from my few other experiences, I am truly convinced of Khen Rinpoche's great kindness, compassion and his ability to heal. 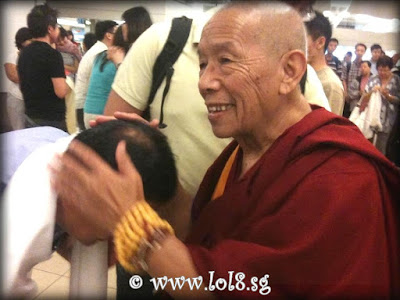 Amitabha Buddhist Centre will be organising the recitation of the Long Life Sutra (Tsedo) and Guru Rinpoche’s prayers this Sunday, 16 Jan 2011 from 2pm.


In these degenerate times, many highly realised and attained masters like Khen Rinpoche, are tirelessly appearing in the human form to plant the seeds of Dharma and to create / continue the cause of pure Dharma to remain with us for many lifetimes to come.

For the many lucky individuals who have the special connection and affinity with Khen Rinpoche as his disciples/students, with our collective karma, we need to offer strong prayers and dedications towards Khen Rinpoche's health and long life. Even through manifesting this illness, we receive the teaching and are reminded of the impermanence of life. We should take this opportunity to reinforce our Dharma practice. Enlightened beings have nothing more they want other than to free all sentient beings from the suffering of samsara.

May Khen Rinpoche Lama Lhundrup have a speedy recovery and a long life, and to continue to turn the Wheel of Dharma. Om ah hum vajra guru padma siddhi hum! _/\_

My other posts on Lama Lhundrup:
25 Sept 2011 -  A closer look at the growing relics of Khensur Rinpoche Lama Lhundrup, an amazing blessing!