His Eminence Kyabje Choden Rinpoche is one of my precious gurus.  In fact, he is also the guru of my guru, Kyabje Lama Zopa Rinpoche.  One friend said in jest, that makes him (Choden Rinpoche) our 师公 (grandmaster), since he is the 师父 of our 师父 (guru's guru)!  Jokes aside, I do feel a very respectful and strange closeness to Choden Rinpoche, like I would to my grandfather. Although I am not able to spend a lot of time attending his teachings (as he is always travelling around the world for teachings),  I do treasure every opportunity to meet him when he is in town or nearby in Malaysia, even though I believe he does not even knows me or remembers me. Choden Rinpoche is a very quiet guru who does not talk much, apart from teachings, prayers, and giving initiations. Beneath his serious and quiet demeanour, lies a great practitioner. Rinpoche’s connections to past spiritual masters were evident from early childhood in his exemplary conduct and superior intelligence as well as in the miraculous signs often witnessed in his presence. 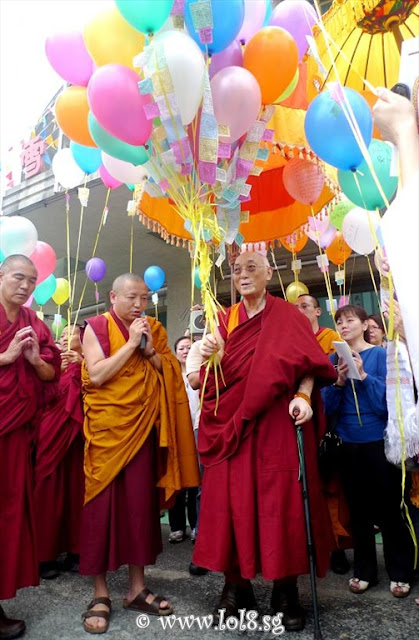 Choden Rinpoche was in Kuala Lumpur Malaysia recently to give a series of teachings. Before the start of an event, all devotees were waiting eagerly and excitedly for his arrival outdoors.  Everyone has balloons with them, written on the balloons all their personal wishes.  Choden Rinpoche was scheduled to release the balloons for World Peace and for all our prayers, wishes and aspirations to come true.  While waiting for Rinpoche, it started to drizzle very light rain. It felt like light snow falling on our heads, kissing our faces and noses.  Everyone went back indoors to take shelter for a while.  Within a mere 10 minutes, Choden Rinpoche arrived, and as he walked from the car to the spot where he was to release balloons, the rain stopped. Very auspicious indeed. 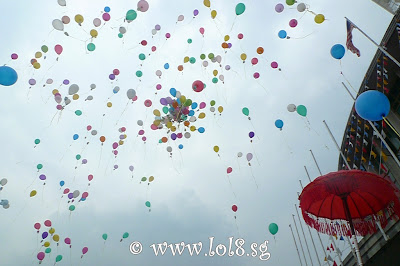 The monks chanted prayers and everyone recited the Noble Stack of Auspiciousness Sutra for this very rare and auspicious occasion.  Choden Rinpoche said prayers before releasing the balloons.  A beautiful display up the skies. 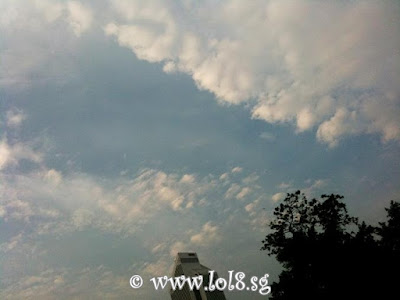 At the end of the day, Choden Rinpoche was leaving the venue, I walked and followed him to his car.  I noticed an unusual sight up the sky.  On one end is a beautiful sunset, on the other end, right above us, I noticed clouds were gathered and divided in two sides, forming a straight long path from one end to the other end of the horizon. 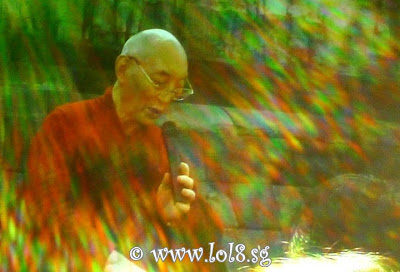 During a Lillian Too's event earlier this year, Choden Rinpoche was a special invited guest to give the audience blessings and oral transmissions.  Lillian showed this beautiful photo of Choden Rinpoche reciting prayers in a holy site.  Everyone snapped photos of the special occasion. Little did they expect to see these beautiful rainbow lights emanating surrounding Choden Rinpoche when the photos were developed. Amazing. So blessed is everyone who gets to see this photo, including you my readers. One need not be present at the occasion to receive this blessing.

Choden Rinpoche was one of seven children born to a noble family in Dahi, the Khampa region of Eastern Tibet. Rinpoche was officially recognized as a small boy as the living reincarnation of the previous Choden Rinpoche, who had been one of the finalists in the search for the 13th Dalai Lama’s reincarnation. At the age of 7, Rinpoche took novice ordination from His Holiness Pabongka Rinpoche. His Holiness reportedly said, “I found your name in Ganden Monastery’s Golden Stupa.” His Holiness named the child Losang Gyalten Jikdrel Wangchuk. 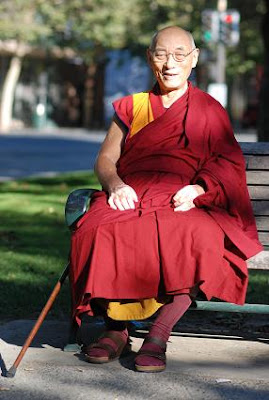 Since his novice ordination, Rinpoche has been observing his monastic vows just as one protects one’s own eyes. Rinpoche traveled to Central Tibet at the age of 17 and enrolled in Sera Je Monastery where he was trained in the Five Canons of Buddhist philosophy. While mastering this twenty-five year course of study, Rinpoche became an outstanding student of His Holiness Trijang Rinpoche and His Holiness Pabongka Rinpoche as well as numerous other prominent lamas. Under their tutelage, he received empowerments, oral transmissions and personal instruction. He was given complete pith instructions and ear-whispered transmissions as well, which led him to an internalized understanding of the teachings. Rinpoche was also tutored during this period by the Abbot of Dawak Monastery who taught him Tibetan grammar, Sanskrit, poetry, literature and astrology. By virtue of this lengthy apprenticeship with many renowned lineage masters, Rinpoche mastered the Five Canons and earned the title Pandita. He was chosen to represent Sera Je in debate when His Holiness the 14th Dalai Lama stood for his Geshe Examination in 1959.

During the 60s, in response to the devastating destruction of Tibetan culture and religion at the hands of the Chinese, Rinpoche undertook a solitary retreat for 19 years. He never left his tiny, dark room in Lhasa for 20 years relying on the metok chuelen practice for sustenance. When practicing metok chuelen (literally: flower essence- to-take-of), one refrains from all common dietary habits, sustaining the body with a substance made of flower essences. Rinpoche states unequivocally that his productive practice, his accumulation of merit and his accomplishment of clarity of mind are directly attributable to his metok chuelen practice. When the Chinese accused him of 'disgracing the motherland' by practicing dharma, Rinpoche was forced to abandon this retreat and take up residence in a Lhasa household. The Cultural Revolution was a dark period in Tibet marked by forced participation in cultural degradation and by the protracted suffering of atrocities. Concurrent with these rampant human rights abuses in his homeland, Rinpoche chose to remain in solitude in household retreat for more than 19 years, practicing the Lam Rim, lo jong and tantra from memory.

In the 80s, Chinese policy became more lenient toward Tibetan religious activity. Endeavoring to exploit Rinpoche’s reputation as a distinguished scholar, the authorities invited him to serve on the board of a cultural committee. Rinpoche readily rejected the offer, having the forethought that he would be required to criticize his root guru His Holiness the Dalai Lama. Instead he used this five-year period of leniency to give extensive teachings, empowerments and oral transmissions to thousands of Tibetan Buddhists. In 1985, Rinpoche was able to escape Tibet, traveling through Nepal to India. In Dharmasala, his paramount wish, the opportunity for an audience with His Holiness the Dalai Lama, was finally realized. This auspicious and poignant occasion touched Rinpoche’s heart indelibly: it was as if he had met with Buddha Shakyamuni himself. The political destabilization in Tibet having reached a particularly volatile juncture, His Holiness advised Rinpoche to not return but rather to remain in India in order to teach. Therefore, while destruction of monasteries, temples and stupas continued unabated in Tibet, Rinpoche traveled to South India and, for the next twenty years, taught the precious Buddhist canon to thousands of monks in the diaspora’s monastic communities.

Rinpoche was regularly invited abroad to teach in monasteries and dharma centers, thereby benefiting people from all walks of life. He has traveled extensively throughout South Asia, Mongolia, Europe and America. Thousands of practitioners have taken novice ordination from Rinpoche in the course of his travels outside Tibet. In sum, Rinpoche spent twenty years of his youth studying Buddhist logic, the Perfection of Wisdom sutras, Middle Way philosophy, Treasury of Knowledge treatises, and monastic code and conduct at Sera Je Monastery. Subsequently, he dedicated another two decades to contemplation, meditating on the Five Canons in order to internalize the teachings. Most recently, he has devoted a third span of twenty years to teaching in South India and abroad, disseminating the Buddhadharma to benefit humanity.
yours truly, STUMPBO @ 9:09 am