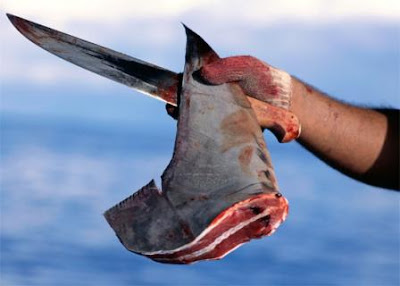 This came after the sales manager, Chris Lee, of its supplier of shark fin products, Thern Da Seafood Pte Ltd, enraged people online (who were against shark finning) by posting in his Facebook wall directed at divers. He mocked them for being unable to stop his company from supplying NTUC Fairprice with sharks fin and Mola Mola products in the upcoming Chinese New Year season. 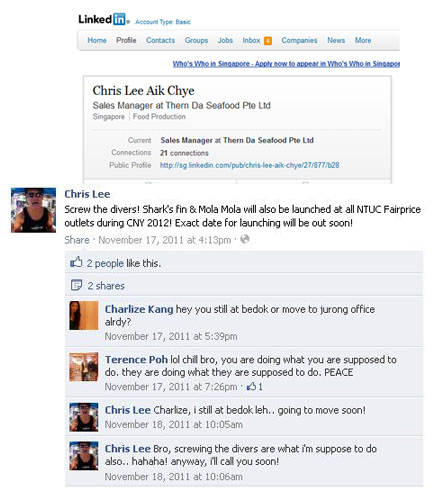 The post drew much criticism and went viral on Facebook and also Twitter. Many called for a boycott of both the supplier and FairPrice. Comments also made its way on to FairPrice's Facebook page. Among them were calls for FairPrice to relook its corporate social responsibility policy and to stop selling shark's fin.

"Thank you everyone for your comments and for alerting us to this matter. As a standing instruction, all our suppliers are required to clear their joint promotional materials and messages with us before implementation. In this incident, the supplier had not complied with our standing instruction. We take this matter very seriously and we are withdrawing all products from Thern Da Seafood across all our stores."

"Sustainability is important to FairPrice and we have been relooking various policies in our commitment to be a socially responsible retailer. The sale of shark fin has been one of the areas that we have been looking into in the past few months. We are pleased to announce that we will cease the sale of shark fin products by the first quarter of this year. This is to ensure that we honour our current commitments to our partners but will no longer be placing new orders for shark fin products."


Such is the beauty of social media. Kudos to NTUC Fairprice for making the right move by being socially responsible, albeit after this embarressing scandal. NTUC Fairprice is not the first supermarket in Singapore to stop selling sharks fin products. Another supermarket chain, Cold Storage, has already taken the lead by saying "no" to selling sharks fin on 1 Oct 2011. Let's hope the other supermarket chains like Sheng Siong, Giant and Shop N Save, will follow suit. Let's also hope that other suppliers and commercial shops do not seize this opportunity to sell to consumers.

If you are a consumer of sharks fin soup, think of the unbearable pain suffered by the sharks whose fins were cut off while they were still alive and thrown back into the sea. Please stop harming the sharks this Chinese New Year. Remember, if there is no demand, there will be no supply. Be kind. Be compassionate.

As for Chris Lee, well, he shot himself in the foot. He lost a huge corporate account and would probably lose his job as well. But I guess we have to thank him in hastening NTUC Fairprice's decision. 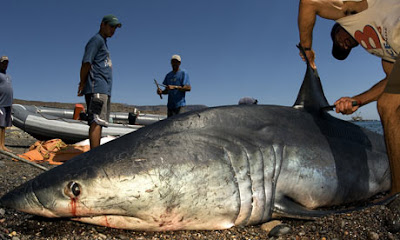 My previous posts on sharksfinning:
Stop shark finning
Say NO to Sharks Fin soup during this reunion! 庆祝新年, 拒吃鱼翅!
yours truly, STUMPBO @ 12:11 am

Email ThisBlogThis!Share to TwitterShare to FacebookShare to Pinterest
Categories Ranting