The Grand Puja begins during this merit-multiplying period!

An exciting weekend awaits! As I have blogged earlier, tomorrow is the start of the Grand Puja personally conducted by His Holiness Dagyab Kyabgoen Rinpoche and an entourage of 15 monks from Gaden Shartse Monastery. Do not miss this chance to participate in the pujas of removing negativities, obstacle-clearing, cleansing, purifying and protection. Also not to be missed are the personal blessing initations bestowed by Dagyab Rinpoche. 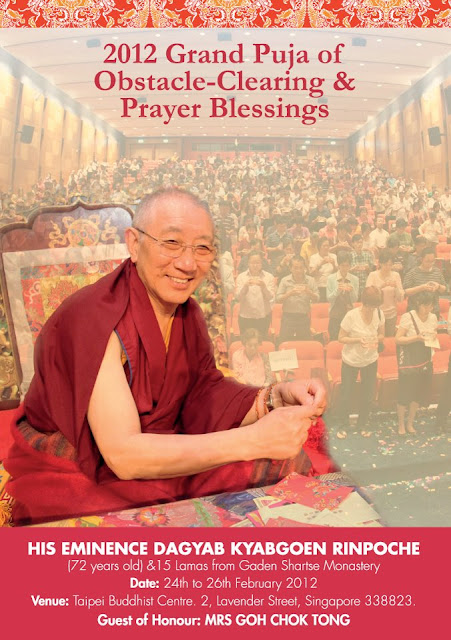 I am doing a shoutout for a couple of meaningful and merit-multiplying activities which I personally feel deeply for. During the Grand Puja, the organiser Gaden Shartse Dro-Phen Ling would be raising funds towards the printing and publishing cost of the Buddhist text, ESSENCE OF LAM RIM, which is authored by His Holiness the 14thDalai Lama.

“Lam Rim” in Tibetan refers to “Stages of the Path”. The Lam Rim is one of the most important Buddhist classic in the Tibetan Buddhism tradition, whereby it presents the stages in the complete path to Enlightenment. The printing of this Buddhist text will be in 4 different languages – Tibetan, English, Chinese and German. All printed texts will be for free distribution, and in particular, the Tibetan texts will be given to 17,500 monks and Sangha community. There is no other greater gift than the gift of Dharma.  You may wish to be involved in this very meaningful fund-raising project, which can benefit countless monks and people around the world.

Another initiative to take note is the Food Fund in Gaden Shartse Monastery.  The welfare of the monks in Gaden Shartse Monastery has always been the main worry of the late highly-respected most venerable Kyabje Lati Rinpoche. Without enough food, it would be impossible for the almost 2000 monks to survive. Gaden Shartse Monastery is one of the biggest and well-known Buddhist monastery based on the Gelug tradition in Tibet (now re-established in exile in Mundgod India). The monastery was prophesized by Shakyamuni Buddha himself 2500 years ago before its actual founding in 1409 CE by Lama Tsongkhapa(who was considered the Second Buddha in Tibet).

To quote Geshe Lhundrub Sopa in [Steps On The Path To Enlightenment Vol 2]... "The Sangha are like nurses who are able to help in the healing process because they understand the remedy that the doctor has prescribed. Because they are taking the medicine themselves, they are able to show others exactly how to follow instructions of the perfect doctor, the Buddha."

Each monk in the monastery eat mainly half the Big Bread for every meal, with a small bowl of watery vegetarian daal and a cup of butter tea. It is only when there are sufficient funds from sponsors each month, that the monks get to eat the occasional rice or hard-boiled egg with their bread. And on very special occasions which are far and in between, only then they get to eat fried rice.

Compared to our well-fed kids in Singapore, who study in air-conditioned comfort and environment, the monks in the Monastery experience less than ideal conditions throughout their learning path.  They study in shabby classrooms which sometime leak during rainy season or the classes are conducted open air outside on the grounds.

In Singapore, we value our kids' education in the hope that they can get into University and make a decent livelihood when they grow up. In contrast, the monks, who are our vehicle to the Path of Enlightenment, have to survive in harsher conditions and having to worry for their next meal, in addition to studying the Dharma. I find this irony extremely sad.  Hence I hope you can do your part by contributing generously to the livelihood of the Sangha, as well as accumulating lots of merits especially during these 15 days of Losar Tibetan New Year, where merits multiply by 100 million times! Metaphorically speaking, each dollar you sponsor is equivalent to $100 million ! 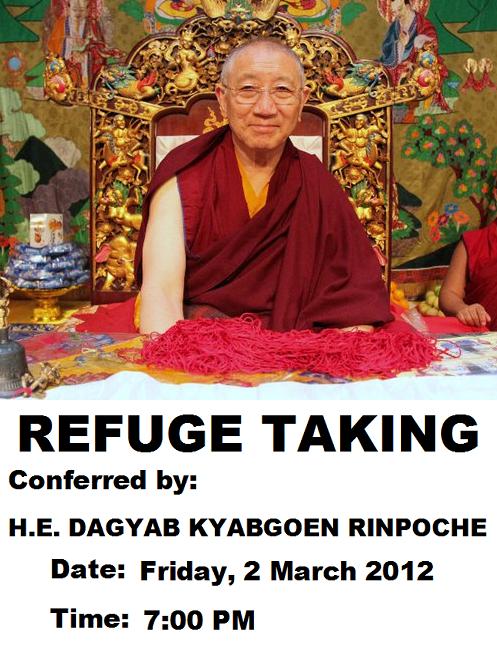 Last but not least, if you would like to establish a karmic connection with a highly realised practitioner, His Holiness Dagyab Rinpoche, he would be bestowing refuge on 2 March in Dro-Phen Ling centre.  You can register during this Grand Puja or call the centre directly.

May all be auspicious according to the Dharma.