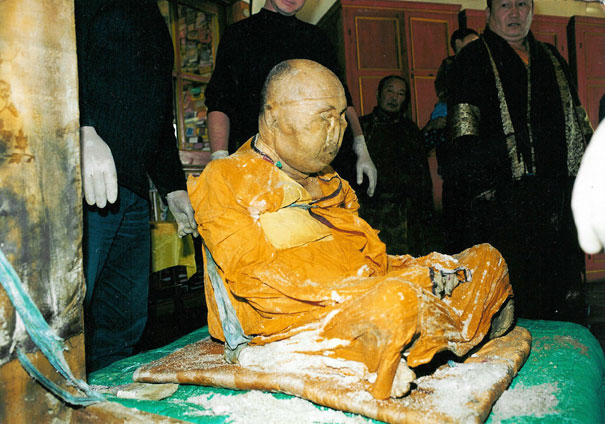 Russian medics fascinated by the imperishable body of Buddhist Lama

Russian medics were floored. "Samples taken 75 years after the burial of a Buddhist lama indicated that the organics of the lama's hair and nails is no different from that of a living person," states Professor Galina Ershova. The body belongs to a famous religious leader by the name of Dasha-Dorjo Itigelov, who used to be the head of Russian Buddhists from 1911 to 1927.

Before this, exhumation had been conducted twice: once in 1955 and in 1973. Not a sign of decay was found on the body both times when the grave was unearthed. Nothing changed the third time the lama's body was dug up in 2002. Afterwards, the medics decided to conduct a thorough analysis of the lama's body.

"His joints bend easily, soft tissues can be forced effortlessly, just like with a living human being. What's interesting is also the fact that after the coffin cover has been removed, we could all detect a sweet-smelling scent wafting out from the inside," says G. Ershova.

According to her, "This completely contradicts of what should happen to a dead person after being buried for 75 years," G. Ershova also highlighted that this is the first case of its kind not only in the history of Buddhism but in the entire history of humankind.

The lama's body has been the object of worship for Buryat Buddhists for two years now. It is situated in Ivolginsk Datsan ( spiritual center for Russian Buddhists located in the capital of Buryatia Ulan-Ude ). According to the current head of Buddhist traditional sanghha in Russia, Khamba-lama Damba Ayusheev, this unexplainable phenomenon had encouraged faithful Buddhists and helped those in doubt to leave aside all their uncertainties.

Sensational results of the thorough examination of Lama Dasha-Dorjo Itigelov were released and made public only this year in Moscow, Russia.

Note: Bodies of holy beings as such are actually not unknown or unheard of in the various Buddhist traditions where great Masters who have transcended samsaric entanglements consciously preserve aspects of their holy bodies as meritorious-supports for their disciples to inspire faith in the confused or undecided beings.
yours truly, STUMPBO @ 10:31 pm