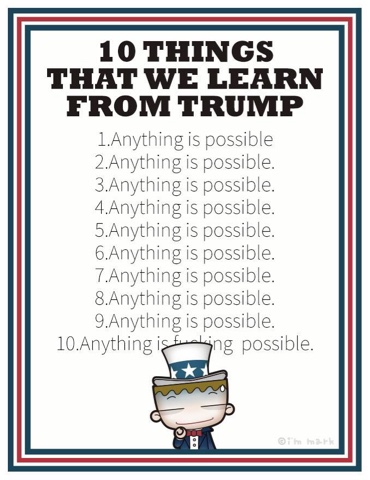 Then someone posted,"This is a nation that has grown up on day time trash talk TV. Why would we expect anything different? Suddenly it's all become very clear. Those seeds were planted long ago".

Were these seeds planted long ago? Maybe. In Buddhism, we believe in the law of causality (cause and effect). You reap what you sow. Everything is dependent on one another. It is the collective karma of a country and its people which create the karma for the type of leader who will lead them.

Other recent pieces of news I heard were also shock after shock, surprise after surprise. It is a strange phenomena, a strange period of changing times. And perhaps it is no coincidence that today 14 Nov 2016 happens to be the Supermoon. This full moon will be not only the closest and brightest supermoon of 2016 but also the largest since 1948 (68 years ago).  What we do to Planet Earth, we receive in return, its triggering effects and energies, the good and bad.

However, on the other hand, at the same time, whatever we view as terrible, has inadventently become, well, better.  This morning when I woke up, I felt an overwhelming sense of calmness sweeping over me. I guess it is not a bad feeling after all, experiencing some calm and happiness despite being in prickly situations. The journey never ends, it's a continuing process, from good to bad, from worst to better etc..
To me, the only one good thing we get out of this Donald Trump episode is.... it made me realise that anything everything is possible. Yes, there is HOPE!  Perhaps it will egg me on to achieve what the society or I once thought to be utterly impossible. Maybe this notion is not so crazy after all.

So, were these seeds planted long ago? Definitely.

Everything can change in a split second, everything is changing at every moment. How dearly we pay to learn the lesson of impermanence.

Anything is f**king possible.