The long-awaited major healing event is finally here, to be held in Marina Bay Sands on 18,19,20 August 2012, organised by Gaden Shartse Dro-Phen Ling. Treasure this chance to meet the renowned 92-year-old Healing Lama, His Eminence Kangyur Rinpoche in Singapore and to receive his healing and blessings. There will be an anticipated huge turn out of 2000-3000 people. Mrs Goh Chok Tong will be the Guest of Honour.

In all the 3 days, each of the 6 healing pujas are specially chosen to counter and heal different ailments. Should you or anyone be suffering from any illnesses which doctors cannot diagnose; black magic harm or diseases such as stroke, paralysis, or cancer etc... then this is a rare opportunity to seek Rinpoche's healing and blessings.

Below is a short biography of Kangyur Rinpoche as well as some links to my previous posts. Read about how Rinpoche has healed many people during the previous Grand Pujas. I will share news of Rinpoche's arrival date in this blog once it is confirmed and the details of the program soon. 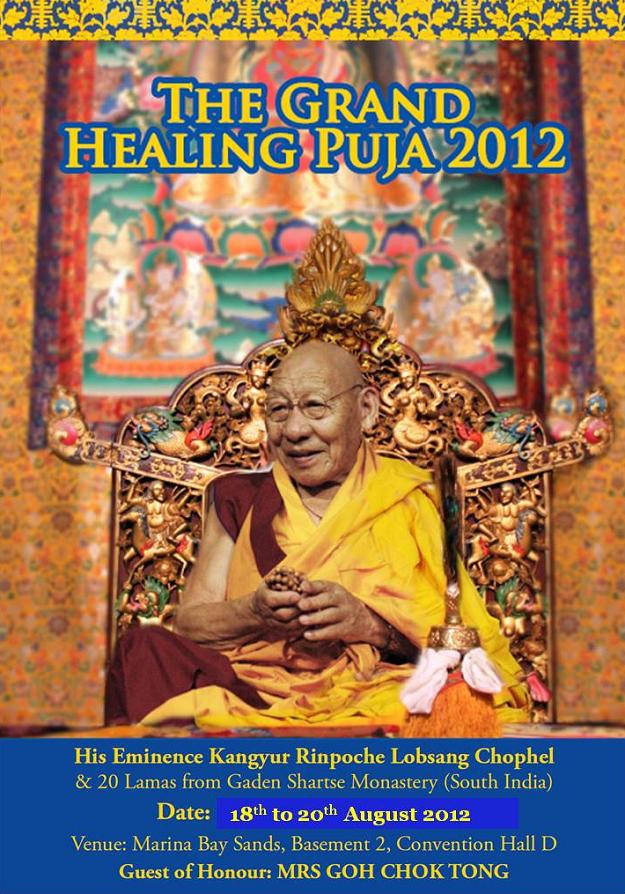 His Eminence Kangyur Rinpoche Lobsang Choephel was born in 1920 in , in a small village called Medoe Chumba (near ). Since a child, Rinpoche behaved rather differently from other children. He did little play and spent most of his time doing prayers and pujas; he also chooses to wear only yellow and red-colored clothes. At the tender age of 9, Rinpoche became a monk in the renowned monastic university - Gaden Shartse Monastery in .

Gaden Shartse Monastery provided Rinpoche his foundational studies of Tibetan Grammar, and he grew up focusing on the study of various Buddhist philosophies. Rinpoche received many precious lineage teachings from highly-realised Masters such as Kyabje Trijiang Rinpoche and Kyabje Ling Rinpoche; and practised meditation under their guidance.

In 1959 due to the Chinese occupation, Rinpoche escaped to . There, he lived in a hill station called Dalahousie,and together with other monks of Gaden Shartse, they continued their practice of daily prayer rituals as they would perform in the Monastery.  Rinpoche also continued his studies and received many teachings from his Guru, the great Lama – Kyabje Panang Rinpoche,and devoted most of his time in the intensive practice of Lam Rim.

In 1974, by the request of His Holiness the 14th Dalai Lama, Rinpoche went to Kennour,India to impart the teachings of the Buddhist scripture – Kangyur - to further spread Buddhism there.  Geshe-la gave the oral transmission of the Kangyur teachings for a whole duration of ten months, and on the last day, His Holiness the 14th Dalai Lama visited Kennour personally, as deeply wished by all villagers. Rejoicing in the unfaltering effort and commitment to teaching, His Holiness conferred the title of “Kangyur Rinpoche” upon Geshe-la. In 1975, Rinpoche undertook examinations and got the Geshe degree. In 1976, Rinpoche was specially selected to represent Gaden Shartse Monastery in the World Tour – together with 8 other monks. That was the first World Tour that Monastery ever organized, and the monks spent nearly a year traveling various Western countries to spread the Buddha’s teachings, Tibetan culture as well as performed prayer rituals.

Rinpoche was also specially nominated by Kyabje Trijiang Rinpoche to undertake the position of the Abbot of Gaden Choeling Nunnery in Macloganc, Dharamsala. He held abbotship for 15 years, and due to his dedicated effort and wisdom in managing the welfare of the Nunnery, their education system has since developed and improved tremendously.

Rinpoche had always wanted to stay in spiritual retreat for his whole lifetime. However, because he was a very rarely skilled talent in healing practices, His Holiness had specially requested for Rinpoche to undertake retreats of a few months each year only. This would enable Rinpoche to continue healing and caring for the sick patients who flock in search of his name.
Today, Rinpoche is 92 years old and resides permanently in Dharamsala. Many centers from all over the world have requested for Rinpoche to visit, but due to age, Rinpoche declined to travel. Hence this time, Gaden Shartse Dro-Phen Ling is truly honoured that Rinpoche has most compassionately agreed to visit their centre in Singapore. This is an exclusive visit especially to help and benefit the people of Singapore, hence do treasure this opportunity to seek the Healing Lama's blessings and guidance.