Received a nice solar-powered mani prayer wheel from a friend who said, "Instead of spinning our thoughts... why not spin it with Om Mani Padme Hung instead!!!"

So fortunate to have wonderful friends around.

Recently, subconsciously, I'm back to chanting 大悲咒 the Great Compassion Mantra of Avalokiteshvara (Guan Yin) in Sanskrit. I can only chant/sing this mantra to a specific tune which I had learned by heart..... 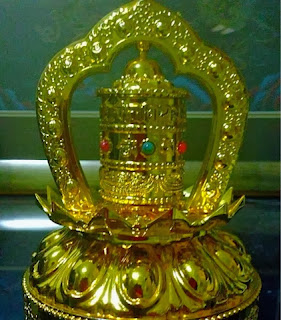 Years back, when I just became a Tibetan Buddhist, this was the very first long mantra I learnt by just hearing and I could recite it by heart within a couple of days. So it has a special significance to me. Always when I'm facing certain trials and tribulations, I unknowingly go back to this mantra and start 'singing'. Homage to the Compassion Buddha indeed.

Certain long Tibetan mantras or praises or offering phrases in some scriptures/texts I could strangely memorise it by heart after just a few days. Even I was surprised myself. Hence I strongly believe I was already a Tibetan Budhhist in some previous lifetimes. 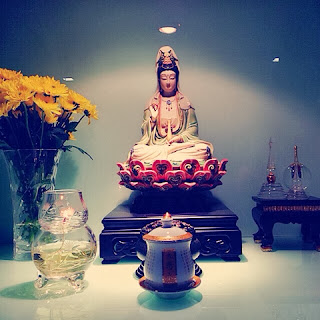 Then I so happened to be watching some videos in YouTube. A Chinese master was encouraging the practice of Avalokiteshvara and her compassion. He mentioned it's good to have a bigger cup when we offer water to Avalokiteshvara. This blessed water offered is called 大悲水 and he emphasized the benefits. So I thought of the simple main altar in my living room and the small crystal cup my mom uses. Then I thought what he said has certain logic, so I got a bigger sized cup with a cover and stand and which has the Great Compassion Dharani printed in Chinese on it. Very Chinese Mahayana I know, quite a big contrast to my personal altar. Yet they are all the same, the same inspiring aspirations of the Dharma.