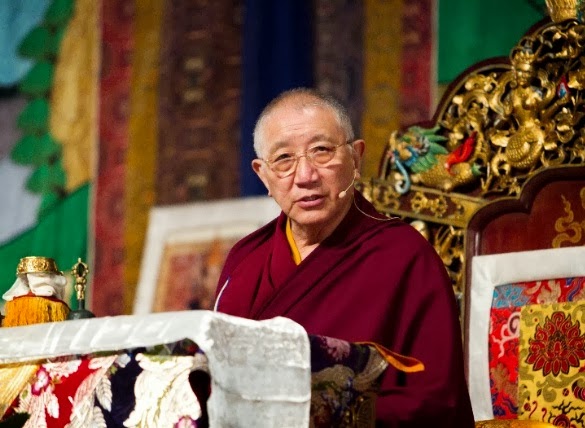 My guru, His Eminence Dagyab Kyabgon Loden Sherab Rinpoche, is here in Singapore for precious Dharma teachings and events again. During his teachings on the 6 Paramitas over the weekend, Dagyab Rinpoche mentioned and made clear his stand (read below) the rumours about Gaden Shartse Dro-Phen Ling (DPL) in Singapore, regarding Dorje Shugden.

I am very happy that Dagyab Rinpoche put to rest this matter by openly sharing with his students/devotees who attended the teaching, whether they are from DPL centre or from other Buddhist centres. I feel this is a very significant statement, and necessary in order to stop the unhealthy and misleading information which has been circulating by people both online and within the Tibetan Buddhist community in Singapore. It is an important message to all Dharma practitioners, to be mindful of their speech and conduct, to maintain religious harmony between Buddhist centres, as well as to preserve the pure teachings of the Buddha Dharma.

Dagyab Rinpoche belongs to a group of most outstanding and highest ranking lamas from the Gelug tradition of Tibetan Buddhism. He is the spiritual head of the Dagyab region in Eastern Tibet and carries the title Hothogthu Nomonhan meaning the "Noble King of Dharma"). He is a close associate of His Holiness the 14th Dalai Lama, who is also Rinpoche's guru, along with Kyabje Trijiang Rinpoche, as well as His Holiness Sakya Trizin. Dagyab Rinpoche left Lhasa Tibet in 1959 together with His Holiness Dalai Lama into exile in India. He is a rare living Master today who holds the most transmissions of the Gelug lineage as well as many transmissions of the Sakya and Kagyu schools.

Below is Dagyab Rinpoche's message on 9 Feb 2014, which I have transcribed.

These people who spread rumours could not do anything. If they really know it to be true, they should prove it. I have known my students (in Dro-Phen Ling) for more than 13 years. I know my students very well. If you ask them who Dorje Shugden is, the most they can say is maybe it is some protector riding on a snow lion, wear monk robe, or hat..... and that’s their knowledge of Dorje Shugden. They also know nothing about Dorje Shugden. Without knowing anything, some people just spread rumours and blame them for doing this and for doing that, without reason. It is better to keep quiet. It is more merit-ful.

Or they might give a reason, maybe they think because I am giving teaching here (in Dro-Phen Ling) that I am involved with Dorje Shugden. That’s right. I was involved. So was the 14th Dalai Lama. But after some time, he (His Holiness Dalai Lama) was knowledgeable enough to know that this (practice) is inaccurate and should be stopped. So do I. I am in the same position as His Holiness the Dalai Lama. If you want to blame me, then please blame the Dalai Lama too.

This is somehow a very sensitive issue about Dro-Phen Ling’s connection with Dorje Shugden. I am so sorry, I have nothing to do with the Dro-Phen Ling administration. I am just giving my Dharma talk and teaching here. If you think what you spread is true, you can challenge them (Dro-Phen Ling). If you need to go to court, please do so, it is your right. These people who spread rumours are also Buddhists. As a Buddhist practitioner, one needs to have certain responsibility. I am quite sure those people who are talking about this must have also taken Bodhicitta vows and Tantra vows. They need to think very carefully the result of committing such a downfall and samaya vows. Talking (spreading rumours) in this way, they must have certain intentions. I suspect they just want to separate Dharma brothers and sisters. This is really not nice. This is not the way to behave as Dharma practitioners.

I have known about these rumours for a few years, and I thought maybe they would disappear on its own but it is always going on. So therefore, I as a Dharma teacher, I need to explain. This is my responsibility to say whether this is correct or incorrect according to the Dharma. Actually, it will be great if these people come to see me and properly, openly, directly, we can discuss. We are all the same as human beings. We all would not want to suffer. We all want happiness. Hence, everyone, especially all Dharma practitioners should work together, and not separately.

You can also read His Holiness the 14th Dalai Lama's message on Dorje Shugden here.