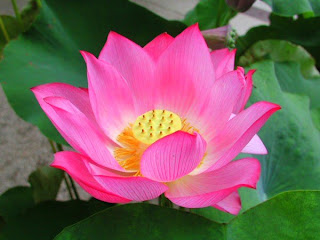 Today someone knocked on my door. Seeing that he was a stranger and possibly a sales promoter, I ignored him and did not open the door. I did not want to make myself frustrated by any aggressive salesman. I didn't want to lose my temper either. He kept pressing the doorbell for the next 5-10 minutes. Then he started to speak in Mandarin (he must have assumed the one inside was an old lady or old man). He said, "don't worry, I am not selling anything .........(pause)..... I am not a sales guy..... (pause)..... please give me a few minutes of your time .... (pause)..... just a few minutes. ........ let me share with you something ........ which can give you HOPE etc....."

So he finally said it, and I knew what he was up to. He was someone from another religion trying to preach to me at my door step! He must have seen the tiny plaque of Buddhist mantras above my door and thought my house was a damn good target! On and off, I have encountered this situation before, whereby perfect strangers tasked upon themselves to introduce to me their God, and worse, discrediting everything about Buddhism without the slightest sense of guilt or sensitivity. That's how many old dying Buddhists who could not even talk in their final moments, were "coerced" into converting. Is there a quota or something..... like a report card to God to show how many sinful people they have converted?

On the other hand, how would they have felt, if I go on the streets and approach anyone who is from that religion and start to tell stories of how great the Buddha was and how if they do not become a Buddhist, they would be creating loads of negative karma etc... Would anyone from the other religions be happy to hear this? Why didn't they knock on a Muslim house? All hell will break lose then. We all remember the couple from that religion who were recently jailed for distributing evangelical publications that cast Islam in a negative light. We also remember what we have seen from the AWARE incident a few months ago.

Coincidentally, this evening I received an email from the Buddhist Fellowship :

Over the years, we have been informed of incidents where family members who have converted to another religion, were encouraged by their new faith leaders to damage/destroy Buddhist and Taoist artifacts (e.g. statues, prints, ornaments) and even make degrading statements at funeral services.

Such acts have caused disharmony in families and much distress to other family members (who are still Buddhists or Taoists) and the community.

In the interest of social and religious harmony, should you come across such offending acts in the future, please write to us and provide the name of the religious organisation, priest/pastor and the individual who conducted the act, so that we can inform the relevant authorities.

Similarly, please alert us of unwarranted proselytisation - whether it occurs at your doorstep, workplace, in schools, hospitals or on the street -- kindly include details (and a photo if you have a handphone camera) of the occurrence.
Manager
Buddhist Fellowship
9 Chwee Chian Road
Singapore 117488
Tel: 6278 0900
If anyone of you encounter the same experience, you may wish to contact Buddhist Fellowship. And please help to pass this message. You can do something if you feel you have been harrassed.

We are living in Singapore, a multi-racial, multi-cultural, multi-religion place, and the government and ministers and even the heads of all religions have advised all religions to be sensitive towards each other so that we can co-exist in harmony.


Don't get me wrong, I have nothing against the religion. I have some relatives and good friends who are from that religion and they are mostly nice people. And if I pass by any places of worship or seen any symbols of their God, I would just bow as a form of respect. I don't criticise their Gods in front of their worshippers, I don't say they have made the wrong choice. Well I just hope they do the same to my religion. Show some respect and don't insult others' choice.


"All major religious traditions carry basically the same message, that is love, compassion and forgiveness, the important thing is they should be part of our daily lives. I find hope in the darkest of days, and focus in the brightest. I do not judge the universe." - HH Dalai Lama


Maybe I should have opened the door and talk to that "religion" promoter, get his name, snap his photo and send it to Buddhist Fellowship!! Like this remark I saw from the internet....
"I've got nothing against God.
It's his fan club I can't stand".
yours truly, STUMPBO @ 11:59 pm