From 19 years of solitude to eternal bliss 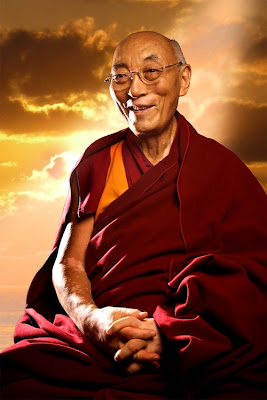 I recently read 2 articles, Tibetan monk in long walk to freedom and The calming influence of Tibetan Buddhism, written about Kyabje Choden Rinpoche, one of the most venerable and holy being I have ever met. He is one of the highest lamas of the Tibetan Buddhist tradition, a respected scholar, teacher and yogi. He is also a very precious guru to me. I am ever so grateful he came into my dream even before I knew who he was, and even before I met him in real life.

83-year-old Choden Rinpoche is a very quiet lama and he never talk unnecessarily unless when he is giving a teaching. His quiet presence belies his wonderful qualities. However it is through this very silence that he transmutes inner calmness to my thoughts/mindstream with his presence. Whenever he arrives, his physical self walks in ever so slowly with his walking stick. However, I always feel he seems to be gliding in, as if he is walking on waters, with no display of any discomfort of weak legs whatsoever.

Choden Rinpoche belongs to the dying generation of authentic lamas from Tibet who is extremely realised and knowledgeable. He is so so so different from all the young lamas of this degenerated age, some of whom are internet savvy, blogging, tweeting and running a buddhist organisation like a corporate setup. I sometimes wonder how they have time to practice the Buddha Dharma, being preoccupied with the mundane material matters of this world. How authentic are they? From my observation, all my gurus, whether older or slightly younger, never have time to surf the internet, being so focused, absorbed with their practice and retreats. Time is never enough giving teachings, prayers and empowerments and being in retreats, as well as helping all of us deluded sentient beings. All these are authentic gurus, the Living Buddhas/Bodhisattvas, the very essence whose existence is to lead sentient beings away from the cyclic existence of samsara.

When China invaded Tibet in 1959, Choden Rinpoche chose a self-imposed solitary confinement. He never once left his tiny dark room in Lhasa for 19 years until 1985. He spent 2 decades secretly meditating and reciting sacred texts he had memorised. Despite his lack of possessions and confinement, he did not feel he lacked anything and is grateful he was able to quietly practice. How many of us can sit quietly for 19 minutes, not to mention meditate for 19 years?
Through Rinpoche’s attendant Geshe Gyalten, he said there were two main reasons: “The benefit of doing a 19-year retreat was to be able to enhance the quality of the mind in ways of peace, focus and clarity, even though the outside world during that time was very crazy. During the Cultural Revolution, Tibetan monks were forced to criticise their spiritual teachers and Buddhism." Rinpoche said all Tibetans were forced to denounce Buddhism as the Chinese saw it as poison, another reason to stay indoors.

“The second reason was to learn all about the Buddhism philosophy, to interpret it and put it into practice.”He was closely monitored by the Chinese and if any religious objects were found they would take them away, but Rinpoche did all the retreats using just his mind. Rinpoche had no ritual objects, no altar, or books, just a set of rosary beads he hid under his blanket. He was constantly spied on and although the Chinese visited him regularly, they believed he was an invalid."If you kept even one scripture text, that is a serious crime - more serious than keeping a gun," he said.

All this stress, fear and worry can be defeated” he said. “In order to overcome it you must identify it ... the stress and worry is just a feeling and part of the mind. If you have a content mind, there’s no more base for fear. The mind will become more peaceful, more focused and gain some clarity in life. But the ultimate benefit will depend on the motivation for engaging in the retreat."

"In order to gain happiness it is not necessary to be a Buddhist, but it is necessary to create the cause of peace and happiness, to develop wisdom. Everyone could benefit from time in solitude."


During a teaching, Lama Zopa Rinpoche once reflected on how fortunate it was that a lady student was able to attend teachings with Choden Rinpoche. He said:

"Just seeing Choden Rinpoche, sitting in front of him, is incredible. We see billions of people in New York, but we don’t get that blessing or benefit for the mind as when we see Choden Rinpoche. Seeing him, she gets that benefit, purifying the mind, receiving peace, and that deep feeling. She got that from somebody who not only has the realization of bodhicitta, who is a bodhisattva, which is an incredible blessing, but from a yogi who has the clear light realization, who is a Chakrasamvara practitioner. Even just being in front of this person, she receives blessings and is purified. Also, this person’s neighbors and the insects and people around this yogi receive blessings and are purified. Being in front of Rinpoche is incredible. It is said that if this kind of practitioner crosses over a bridge, then under the bridge the insects, worms, and beings are liberated, their negative karma is purified. This is very fortunate.“

Lama Zopa Rinpoche also said, “Choden Rinpoche is an exceptional lama, most kind, compassionate and whose speech is most powerful, able to move, bless the mindstream – the result of having been in a retreat for 19 years."

May my most venerable guru, Choden Rinpoche, live long so that many more sentient beings are able to make a connection with him not just in this lifetime, but in all other future lifetimes as well.


My earlier posts on Choden Rinpoche:
Choden Rinpoche, truly Vajradhara
I finally met the guru from my dream in real life
"When we die, we don't just vanish"
Who is he?