Some time back, my friends and I visited Sarang Korean Restaurant at Orchard Central. We opted to sit in the open area outside, as it was advisable if we were going to do some BBQ-ing.  There was also a gigantic fan above and it was kind of windy as well. 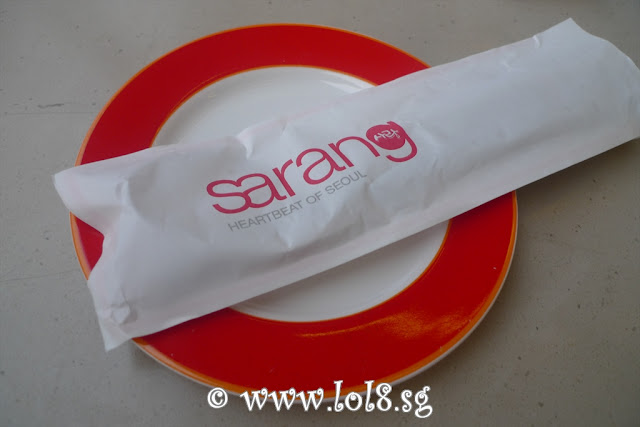 Sarang is known to host many Korean celebrities when they are in town. So I guess their quality of Korean food served should be comparable to authentic food in Korea. We ordered and tried a few signature dishes from the ala carte menu. 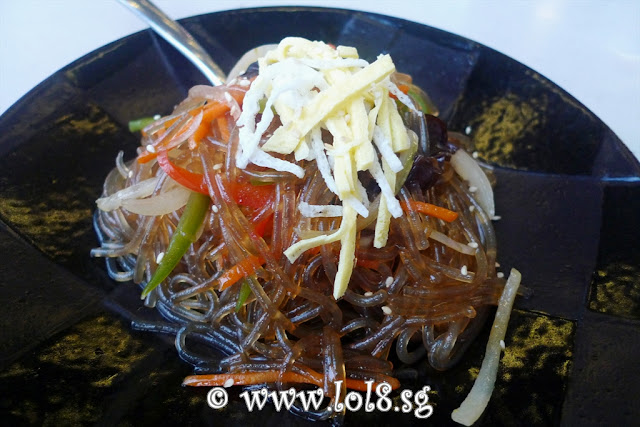 Japchae is sweet potato noodles stir fried in sesame oil with various vegetables (like thinly sliced carrots, onion, spinach, and mushrooms), flavoured with soy sauce, and sweetened with sugar. It is usually served garnished with sesame seeds and slivers of chili. It may be served either hot or cold. I like the springy taste of the noodles and it was quite appetising without feeling too full. 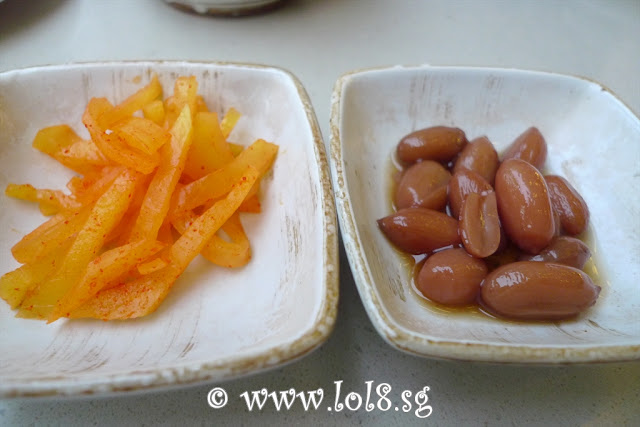 I always like the appetisers on the side, served with variety and portion. 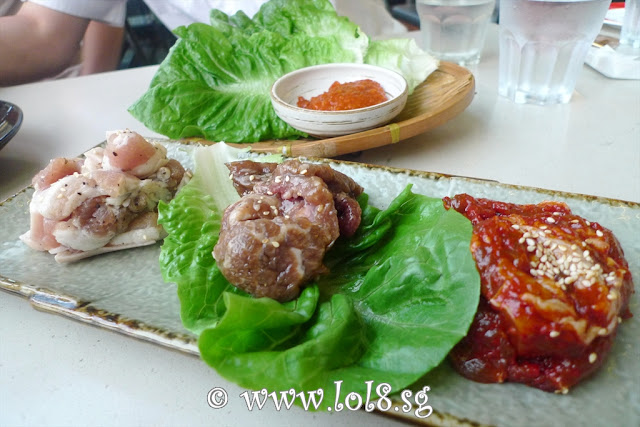 This is the BBQ Platter which comprised of pork, beef and marinated chicken (brightly coloured in red). It is not an incredibly big portion but the meats are fresh and beautifully served. 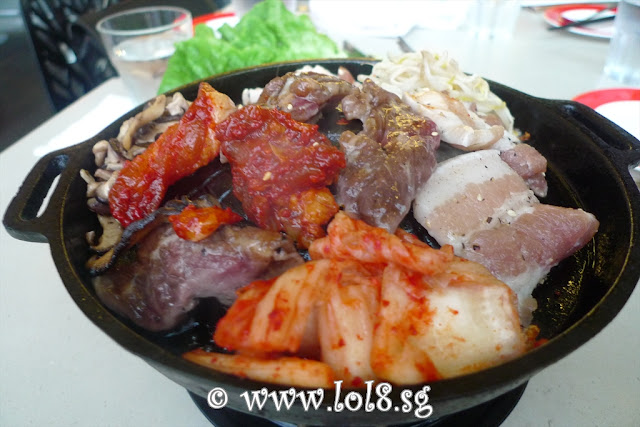 Besides the BBQ Platter, it also comes with side ingredients like mushroom (my favourite), kimchi, beansprouts.  We lay everything on to the BBQ pot and start cooking! 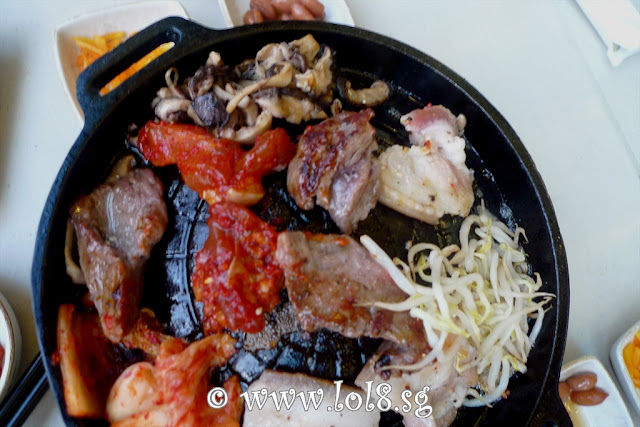 I guess there is something about the sizzling sound of BBQ that attracts people, which explains the popularity of Korean BBQ, Thai BBQ and steamboat in restaurants. And I believe the popularity of K-drama plays an important role in this as well. 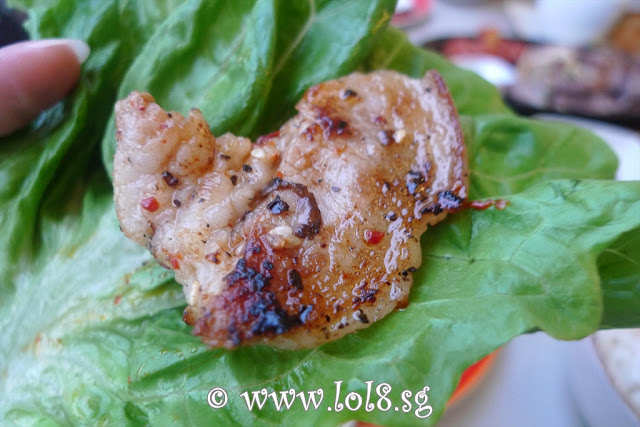 This was my cooked BBQ piece of pork. It reminded me of the BBQ food I had on my South Korea trip. We have this almost every meal. We wrap it in lettuce, the taste was great with the aroma of BBQ as well as the crunchy vegetable. The very marinated chicken was also good, but slightly a tad too sweet for me. I did not touch the beef. 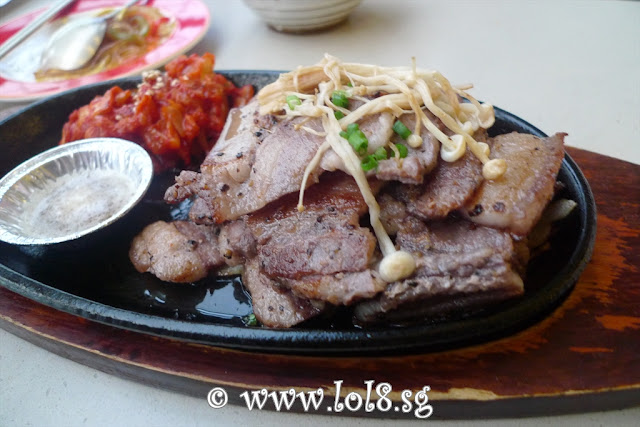 Another dish we ordered was Drunken Pork, which came in a sizzling pan with kimchi, enoki mushroom and special powder to dip in.  The texture was slightly tougher than that of BBQ pork but otherwise, it was a delectable dish. 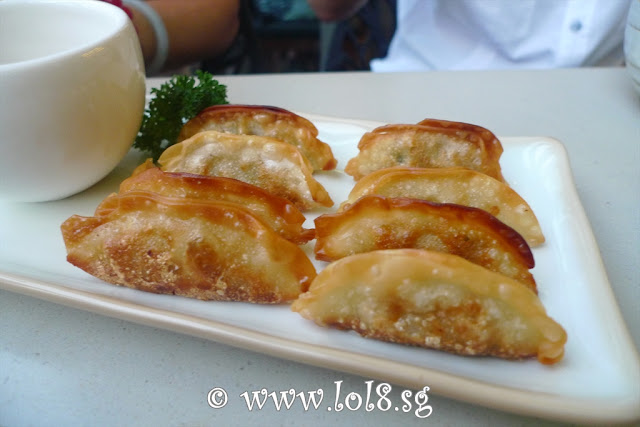 I did not like the Fried Dumplings. I think the Chinese do these better.  It was too dry and slightly over fried with little ingredients inside. This dish is interestingly called Piggy Jumps Over The Wall. It is basically Kimchi Stew witth loads of kimchi, pork and onions.  Not exceedingly spicy at all, it was just ok, a warm soupy dish to go with our otherwise dry dishes.  We skipped desserts and proceeded somewhere else. It was an enjoyable dinner with friends on a not-so-busy weekday evening.
yours truly, STUMPBO @ 8:40 am