"If we do not heed the Buddha's teaching, even if we make offerings to him, it is useless"

A couple of days ago, at dawn about 6am, I dreamt of my guru Dagyab Rinpoche for a brief moment.  I was in a big building and a few of my Dharma friends were around. It seemed like it was a chalet or resort in tropical surroundings, very airy, with lots of plants. The walls were painted white.

Then suddenly Dagyab Rinpoche appeared with his family and followers behind him. As usual, Dagyab Rinpoche was smiling widely and very happy as he greeted the few of us, holding our hands as he walked past. Rinpoche had just arrived in Singapore for teachings. We quickly led him to a room, supposedly his apartment. End of dream.

This is the second time I dreamt of Dagyab Rinpoche. Technically, it is true that Dagyab Rinpoche would be arriving in Singapore in a couple of months. Rinpoche is one of the most amicable gurus I ever met... no airs, no formalities. He does not like any pompous arrangement for himself, despite being one of the highest tulkus in the history of Tibetan Buddhism.

Dagyab Rinpoche, has for many generations been the patron (Kyabgoen) of the Dagyab region in eastern Tibet. He is currently the 9th Kyabgoen and holds the name His Eminence Loden Sherab Dagyab Rinpoche. He is the spiritual leader, protector and also the secular head of the Dagyab region. He is known to hold the most transmission of the Gelugpa lineage, as well as a vast number of transmissions of the Sakya and Kagyu schools.

A new Facebook Page, "Dagyab Kyabgoen Loden Sherab Rinpoche" has been started to share about Rinpoche, his news and teachings. 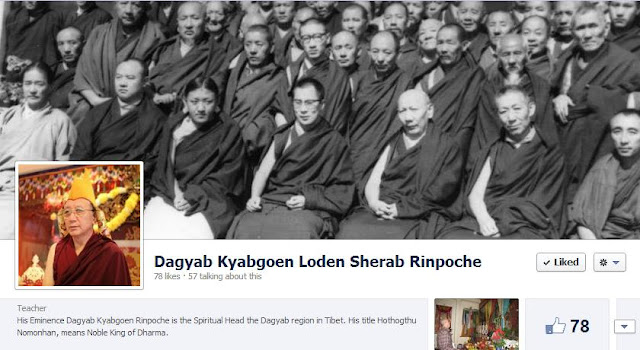 Below is an excerpt of Dagyab Rinpoche's teaching which I transcribed earlier this year.

"Many hesitate to die, we are afraid of dying. Actually, to die is not so serious. What is dreadful is what comes after death. Think of the cause and condition. However we have the power to change karma. We can determine our karma. Our karma is in our own hands. Dealing with karma is like taking refuge. It is not just saying prayers to the Three Jewels but we need to go for refuge from our heart. This was correctly taught by the Buddha. He taught karma, cause and condition. If we do not heed the Buddha's word/teaching, even if we make offerings to him, it is useless.

Dharma practice needs to be done from our heart. We have the freedom to determine the results. Therefore we need to understand the Four Noble Truths, and to learn to deal with karma the proper way. If we know this well, we will practice and be strong. By being disciplined and to concentrate, this will destroy our ignorance, and from that, realisation of Emptiness will arise."